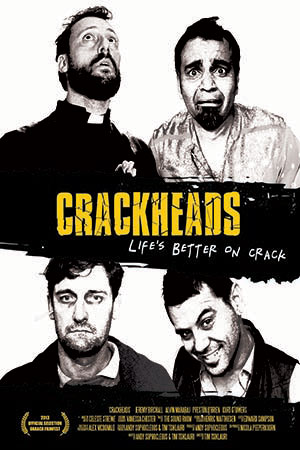 Our story follows four unlikely friends brought together by their passion for social football, who fall victim to meth. They all have their own reasons why they succumb to the drug.

Thomas is a drug counselor/psychologist who has reached a crisis point in his life. As a psychologist he has not reached the heights that he had once hoped for. Organized to the point of OCD, he has come to the realization that he is no more than a reflection of his father. At the same time, after many failed attempts to make progress with a druggie patient, he has become painfully aware that his experience, especially around drugs, is limited to books.

Raj, the Indian actor, is a follower, not a leader and will do what his mates are doing. As an actor he is nowhere near where he hoped he would be and there is a strong sense of %u201Cnow or never%u201D growing inside him. He is drifting aimlessly in an appalling relationship with his controlling girlfriend Ashika and has to lie about getting a role in a film just to get out of the house and watch football with his friends.

Nick is a seriously conflicted, angry and slightly racist Catholic priest with a hidden past. His conflict and his anger arise from the fact that he is clinging desperately to the ideal of being a priest because this is the only direction he has in life, but something deep down inside him knows that he is living a lie.

Jimmy is a sex-obsessed used car salesman, an ex-criminal struggling to go straight who%u2019s also an appalling and unscrupulous businessman. Like Nick he also is living a lie. His business is falling apart around his ears. He tries to project the image of a suave entrepreneur while deep down inside he knows he is neither suave, nor an entrepreneur. Jimmy is no stranger to taking drugs and becomes a devils%u2019 advocate when the four friends cross paths with the drug.

When Nick is presented with a bag of meth by a worried parishioner the drug becomes the catalyst that sends our four friends on a disastrous, but at the same time, hilarious roller-coaster ride that will change their lives forever.