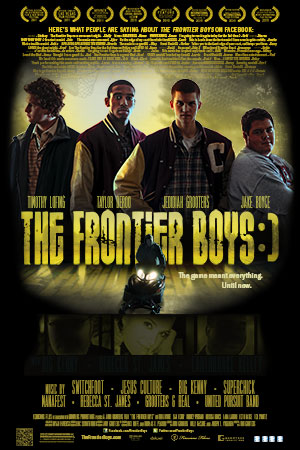 The game meant everything. Until now.

In the last gasp of winter in a small Northern Michigan town, four high school sophomore boys are living on top of the world. Best friends, classmates, and peers, T.J., Jed, and Brent are all starting players for an undefeated varsity basketball team. Jackson, their loudmouthed hyper-enthusiastic friend, makes more noise for his three friends than an entire cheerleading squad. All four share a history of companionship, a notable nickname, and all the confidence and exuberance of youth.

Their basketball season is shattered when Brent's older brother, Mike, attracts an Irish gang leader named Sean O'Sullivan. Sean is intent on setting up a rural meth lab and supply operation in the peaceful community. Despite plenty of cash to fund the start-up, Sean isn't sure that he can pull together a team of locals to do the dirty work.

Since Mike is the one who invited Sean to town, he naturally sees himself in a key leadership role in the gang. Both Mike and Sean see the need and benefit of having a high-school aged member to infiltrate the school system from within. Mike entices his younger brother Brent to check out an opportunity to make some serious money. Against his better judgment, Brent agrees and ends up in the wrong place at the wrong time.

On a cold Sunday night, Brent is expected to meet Jed, Jackson, and T.J. for a skating party at the local rink, but he never shows. As the group of kids wait outside for the doors to open, Brent is riding in a car with Mike, Sean, and Frank. The car approaches the rink and Sean hands Mike a 9mm handgun. "Aim a little high," Sean says. Brent sees the gun and flails out as Mike pulls the trigger. As the car speeds away, T.J. drops to the ground, blood soaking his letter jacket while Jed frantically dials 911.

Brent's best friend T.J. suffers a spinal injury, a cracked head, and severe trauma. He lapses into a coma facing paralysis, brain damage, or worse. Brent is threatened by Sean to keep his mouth shut.

The small town of Charlevoix is rocked by the violence. In order to knock Brent out of his funk, Jed initiates his own investigation of the crime. Jed, Jackson, and Brent try to discover the shooters, but Brent's heart is deeply conflicted.

The action intensifies as the boys get closer to solving the crime: Brent gets more and more nervous about his own exposure; T.J.'s father wrestles with the final decision of organ donation; Jed begins to receive mysterious messages from the comatose T.J.; and the basketball team struggles to regain its identity and success.

Ultimately, The Frontier Boys is a story is of how guilt can erode a person from the inside out, and how in the midst of life's trials there are people who turn to God for comfort, conviction, and hope.